“A blend of elegant, rhythmic and virtuoso playing and easygoing folk club banter. A quiet triumph”

John Spiers, better known in folk circles as Squeezy, is one of the leading melodeon players of his generation.  Well known for his partnership with Jon Boden as well as being a member of Bellowhead, the most successful folk band in recent history.  John was also a member of Eliza Carthy’s band, featuring on her 2002 Mercury nominated album, Anglicana.  He now plays with Peter Knight, fiddle player from Steeleye Span and is also a member of the Gigspanner Big Band.

Mixing infectious dance tunes with incredibly sensitive and moving slow airs on a mind-boggling range of different squeezeboxes, John’s solo shows are a mixture of traditional material and his own more intricate compositions.

I'm self-publishing a new book of traditional tunes to partner my 2017 book Jiggery Pokerwork.  It contains 94 tunes suitable for all melody instruments with suggested chords, and it includes all the trad. tunes I've ever recorded with Spiers & Boden, Eliza Carthy and Bellowhead along with many others.  Where the original tune is in a more unusual key I've included a transposition to a more folk-friendly (ahem melodeon-friendly!) key.

It is currently on its way to the printers and I am taking pre-orders from today to help pay for the printing costs.  You can pre-order your copy from my online shop here.  There are plans to create a fully navigable PDF digital version for sale soon, but currently all pre-orders are for physical copies only. 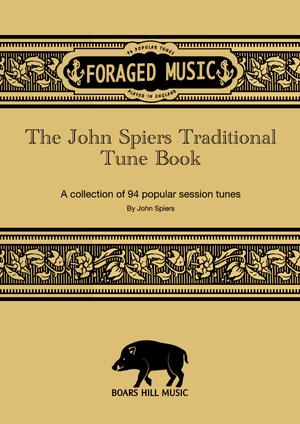 Like all other artists, I find myself having to tell you what you probably already know.  All gigs are 99% likely to be cancelled for the entirity of this Spring because of the CoronaVirus.  I don't want this to be happening.  I can't afford for this to be happening.  I'm scared that people I know might die from this thing.  In other words, I'm just like everyone else!  Please see my gig listing to make absolutely sure if you like, but who are we really kidding?  My final three dates with Peter Knight have had to be postponed pending rearrangement and I am not anticipating any of the gigs with Jackie Oates, or with the Gigspanner Big Band to be going ahead this Spring.  Just because the gigs are still up on the listing doesn't mean they're going ahead and as each one is systematically wiped from the calendar I will update it to postponed or cancelled with a very heavy heart.

We will be launching the Gigspanner Big Band album, Natural Invention on April 10th as scheduled - but the lovely tour that Deborah put together for us to play all the exciting new music we wrote over the course of last Autumn now hangs so far in the balance that frankly I can't see it any more.  I was really chuffed to have joined the band and delighted with the way the new music has gone. We all worked so hard on it.  I think the album sounds amazing and I am genuinely looking forward to sharing it with you all.

But in the meantime.  I have no gigs.  Worse than that I now have no income.  If I don't play, I don't get paid.  All musicians are in the same boat there I'm afraid, as are many other freelancers and people in the gig economy.  It's scary times for many.  Our gigs will likely be rescheduled, but not until September at the earliest, some probably not until 2021... and ultimately that will be the same as cancellations for us.  At this time, it would mean a lot to all musicians who make little to no money from royalties and streaming services, if you would consider buying something directly from us.  My web-shop is here if you would like to do that.

So after a few days of self-pity and panicking, I will be ploughing headlong in to the "self-isolated" online free-for-all that musicians are currently unleashing.  This will mean new online content which I will attempt to make you pay for, or beg for with a donation button.  All my dignity has gone out of the window!  It will probably mean my new traditional tunebook being finished and sold in the shop (either as a download, or as a physical book if I can afford the printing costs).  Who knows ... I may even get around to finishing that solo album I nearly make every couple of years ;-)

I'm very pleased to announce 10 new dates with the amazing Peter Knight in the run up to Christmas this year.  As well as tunes from Well Met, we will be playing some new seasonal material based on traditional Christmas/Wassail/Winterval/Yule music.  You can see the full list of dates over on the gigs page here.

It is with great excitement that I can announce that following the successful collaboration with the former Steeleye Span fiddle virtuoso, Peter Knight at Folk East Festival, clever people behind the scenes (Hello Debs!) have put together a cracking tour for us in March 2018!  It's going to be amazing working together with Peter.

You can check out the tour dates here.

It's a new year, so it seems only fitting that I have a new website to go along with it.  Have a look around, there's a lot of new stuff here in preparations for the year's music.  I have already been busy and have finished writing my new tune book featuring 60 original tunes (plus transposed versions in to session-friendly keys) and I'm also working on a companion book of traditional tunes including many I have recorded in various guises plus other favourites.  The long-awaited solo album is in the pipeline and I have a run of gigs coming up in the next couple of months which you can check out here on the new gigs page kicking off with a show at Barnsley Civic on the 24th Feb.